Yesterday was the 75th anniversary of Winston Churchill taking power as Prime Minister of Britain (May 10, 1940) and, perhaps, saving Western Civilization from sliding into darkness.

20-20 hindsight is often the norm when we read history, and it is only natural for us today to assume that Hitler and Nazi Germany would of course have been defeated in World War Two. The idea that one man may have saved his nation, and even our broader civilization, from the tyrannical abyss seems far-fetched. But a careful reading of Churchill’s record and leadership could lead you to that conclusion.

Winston Churchill faced a challenge similar to what confronts the United States today: powerful academic and political factions do not understand the greatness of America or her history, and have lost sight of why it is so important for the United States to be free, strong and resolute. Likewise, Churchill faced a political culture that was simply spent from both World War One and the Great Depression. There are perhaps parallels there with the long wars, bureaucratization, and languid American economy of the 21st century.

Churchill was warning England about the threat from Germany more than 15 years before he was called to save her. He was called in May, 1940 to be Prime Minister because there was just no one left who could do the job. It was a desperate measure. He was either ignored or vilified for years, especially by his fellow Conservatives. He was viewed as an ideological, tired old warmonger. 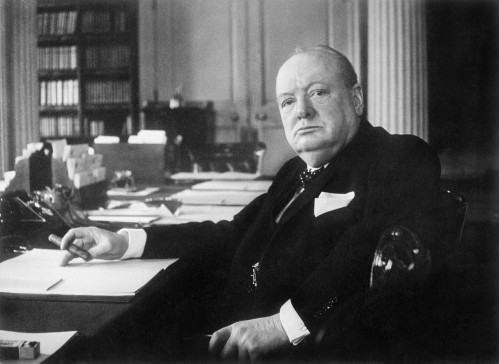 Winston Churchill’s campaign against the Nazis in the 1930s in the House of Commons and the press is well known, but I thought I would share with you two of his earliest, fateful observations, which were made before Hitler seized power:

— In 1930 Churchill dined at the German Embassy in London with that nation’s counselor, who sent this report back to Berlin: “Hitler of course declares he does not intend starting a world war but Churchill believes that Hitler and his followers will grasp the first chance to resort to arms again.”

— In 1932 Churchill was doing field research in southern Germany for one of his books. He was staying in a Munich hotel that Hitler often frequented, and arrangements were made for Hitler and Churchill to meet. As Hitler’s envoy finalized the details for the next day’s meeting, and turned to depart, Churchill said “Why is your chief so violent about the Jews? I can quite understand being angry with Jews who have done wrong or who are against the country, and I understand resisting them if they try to monopolize power in any walk of life; but what sense does it make being against a man simply because of his birth? How can any man help how he is born? Tell your boss for me that anti-Semitism may be a good starter, but it is a bad stayer.” Hitler canceled the meeting.

Historian John Lukas published a book in 1999 called Five Days in London, May 1940 (Yale University Press). While many historians have focused on the long-lead warnings Churchill made going back to the 1920s, this interesting book focuses on the key days inside the British government when the Nazis had over-run much of Europe, and were about to subjugate France. Key players in the British War Cabinet, including the Foreign Secretary, were ready to throw in the towel and cut a deal with Hitler. Lukas makes a compelling case that only Churchill himself was able to block that effort and keep the United Kingdom in the fight on the eve of what was to become the Battle of Britain.

Churchill’s argument was always that the British people will do the right thing even if it is hard, as long as they know the facts. You can rely on them. Today, Americans have many concerns about the future health and well-being of our nation. According to RealClearPolitics polling averages 61% of likely voters believe our country is on the wrong track. There are numerous problems, both foreign and domestic, that have the potential to spin out of control. Our 239 year experiment in self-government is exactly that: an experiment. We should not take our long success for granted, and we should listen to and respect leaders who are willing to take on tough problems, even if they cut against the prevailing wisdom, or our own self-interest.