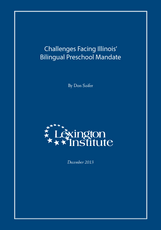 Starting in July 2014, Illinois will require bilingual preschool education in all public schools where preschool is offered. This new mandate, through regulations adopted by the Illinois State Board of Education in 2009 following approval by lawmakers, will make Illinois the first state offering statewide bilingual preschool, and has been widely touted by advocates as a model worthy of replicating in other states.

But as the new requirements are on the verge of becoming reality in schools around the state, several major obstacles remain to successful implementation. In fact, they stand to indicate that the expensive mandate, however well-intended, lacks satisfactory educational and practical foundations, doing little to actually advance the interests of those it is intended to directly serve.

Three major concerns, and others raised in this report, should be addressed by
policymakers concerning the Illinois policy model: