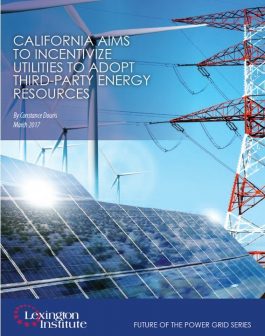 California’s ambitious policy goals of reducing greenhouse emissions and increasing renewable resources could be assisted by third-party energy sources. Distributed energy resources are defined as renewable generation sources, energy efficiency, energy storage, electric vehicles, and demand response technologies. Such third-party resources, which have been around since Thomas Edison built the first power plant in 1882, can help the grid resist failure and allow for a quick recovery in the event of a power outage.

Currently, utilities in California are able to generate a profit when replacing or upgrading components of the electric grid, such as poles, wires transformers and substations, but lose money when adopting distributed resources because customers are not purchasing as much electricity from them. Because utilities have averted pursuing these new technologies, lower rates for electricity customers have not been realized and improvements to the electric grid have been delayed, conflicting with the public interest of building and maintaining an affordable grid.

The California Public Utilities Commission has recognized that utilities are hesitant to pursue third-party energy sources because they are riskier and are negatively impacted by doing so. In December 2016, the CPUC approved a pilot program to incentivize utilities to incorporate cost-effective distributed resources. Utilities must each identify at least one project and up to three more additional projects to receive a four percent financial incentive that will be applied to the annual payment of the resource.

While the CPUC aims to motivate utilities to adopt more distributed energy resources, it does not want electricity customers to pay more as a result. This is why the pilot program requires that distributed resources plus the financial incentive must cost less than the traditional investments they replace. The CPUC will establish limitations on the deployment of third-party energy sources to locations where benefits exceed costs.

The electric grid is currently designed to carry electricity one way, from centralized generating facilities across many miles to users. Unlike outdated, one-way power flows, distributed resources allow for the two-way flow of electricity. This provides some advantages, such as selling excess electricity to the grid to make up for deficiencies and make the grid more resilient and reliable. However, two-way flows also involve some uncertainty because electricity will be obtained from unreliable sources and many participants will be using different technologies.