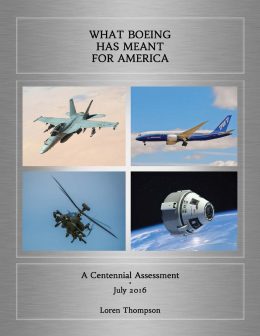 An Enterprise Unlike Any Other. The Boeing Company was founded on July 15, 1916. Over the following century, Boeing became the biggest aerospace enterprise in the world, famous for its jetliners, fighters, rotorcraft and space systems. With annual revenues approaching $100 billion and an order backlog of nearly half a trillion dollars, Boeing is America’s biggest exporter and the world’s number-two military supplier.

Why Boeing Survived While Others Died. Boeing managed to outlive competitors by developing a culture that was not dependent on the guidance of its visionary founder, and investing continuously in technology rivals could not match. Rather than specializing in a handful of products, it continuously adapted and acquired as market conditions changed, applying its skills across a broad array of aerospace markets. Focused diversification within aerospace gave the company expanded opportunities and resilience.

A History Of Fearless, Disruptive Innovation. Boeing has inherited a rich tradition of innovation from many sources. The National Academy of Engineering lists half a dozen Boeing aircraft among the greatest engineering achievements of the 20th Century, and the company continues to disrupt markets today with offerings like the 787 Dreamliner. Keeping ahead has sometimes required Boeing to take big risks, but its success is grounded in developing novel products that change the direction of global commerce and culture.

Signature Products That Changed The World. Boeing’s 737 jetliner is the most heavily used commercial transport in history. Its 777 is the world’s most popular widebody, offering greater range than any other commercial transport. Boeing’s military products have been similarly impressive, with planes like the iconic B-52 bomber and F-15 fighter defining the meaning of air dominance. The B-52 remains the most common heavy bomber in the U.S. fleet today, and the F-15 has never been defeated in aerial combat.

Boeing’s Impact On U.S. Economic Performance. Boeing employs 160,000 workers, and has 20,000 suppliers — the vast majority in the U.S. Over 70% of its commercial revenues and over 30% of its military revenues are generated abroad, making it America’s biggest exporter. Unlike other manufacturing companies, Boeing has not moved offshore in pursuit of cheap labor or lower taxes. Instead it continues to innovate in America, sustaining a vast “ecosystem” of suppliers in virtually every state.

Boeing’s Contribution To U.S. National Security. From its ground-breaking B-17 bomber in World War Two to the carrier-based F/A-18 Super Hornet fighter today, Boeing has played a central role in helping America’s military keep the peace. Most of the bombers and missiles in the U.S. strategic nuclear force were built by Boeing, as were many of the fighters, tankers, airlifters, radar planes and military rotorcraft developed in recent decades. Its launch systems, satellites and munitions are vital to U.S. military power.

What Boeing’s Brand Says About America. Boeing is one of the world’s most valuable brands, attesting to its achievements as a purveyor of human progress. Boeing’s success reflects the virtues of the American free-enterprise system, demonstrating the U.S. remains a technology leader that can compete effectively in exporting manufactured goods. Boeing has prevailed by working with both commercial and government customers, proving that excellence in one market segment need not preclude success in the other.

The Promise Of A Second Century. Boeing will continue dominating the commercial-transport market over the next generation with disruptive product offerings competitors cannot equal. Its large-aircraft skills will be applied to building military tankers and sensor aircraft, while services — already a sizable part of its business portfolio — continue growing. The company’s space business will grow too, and its rotorcraft business will remain a global leader. The company will pursue new opportunities in manned and unmanned systems for diverse customers.