When Michigan’s latest standardized test scores were announced last month, the news was greeted positively across the state. At every grade level, both reading and math scores improved for all students.

“When you see this consistency of progress across the board, that’s really good news,”observed State Superintendent Mike Flanagan. Governor Jennifer Granholm echoed this sentiment in a statement as well.

Some of the best news came from the state’s 63,000 English Language Learners, whose scores continued their steady improvements.

On the Michigan Educational Assessment Program (MEAP), 59 percent of third grade English learners scored “proficient” (in the top two levels) on the exam’s reading and writing section, a drop of one percentage point from last year’s results but remarkable nonetheless. Third grade English learners outscored their peers in grades 4-6 in reading and math, a trend reflected statewide for all students. Among third graders, 78 percent scored “proficient” in math, the same figure as on the Fall 2005 exam.

Even though English learners represent only 4 percent of Michigan’s students, their population has grown by more than 50 percent over the last decade. That growth makes them important to the state’s educational and economic future. In Grand Rapids, for instance, more than one-fourth of students are Hispanic, and many of these are English Learners.

So are Michigan’s English Language Learners finding greater success in the classroom? Or, now that test scores are linked to future school budgets under No Child Left Behind (NCLB), are Michigan’s improvements rather the result of special testing accommodations that inflate results?

In 2005, the federal Department of Education recognized Michigan as one of only two states in the nation where English Learners had met required levels of proficiency for both reading and math. Some observers suggested that this was because the state had “backloaded” its strategy for meeting NCLB – allowing smaller gains in the first few years while relying on steeper, perhaps unrealistic, gains several years down the road.

But to what extent are the state’s policies of offering special accommodations for these students also a factor? According to the Michigan Department of Education, testing accommodations for English learners include extending the time permitted (to roughly 1 1/2 times that of other students), offering frequent breaks, and allowing students to mark answers directly onto the instruction booklet.

The state also issued both a video and an audio version of the test: students can take the English Language Arts sections using these versions read aloud in English, or read in Spanish or Arabic for the mathematics, science or social studies tests.

As Michigan and other states expand their use of testing accommodations, researchers are faced with determining which ones are valid and which simply make a test easier without closing learning gaps.

As the National Council of La Raza explained, “an appropriate accommodation makes the assessment more accessible to English Learners without altering the rigor of the assessment or providing them with an unfair advantage over [other students].” Anything less shortchanges the children whose education can least afford it.

Are the improvements by Michigan’s English Language Learners a reflection of a genuine improvement in learning? Or do they result from “gaming the system” with special testing accommodations? At present, the answer is unclear.

Decision-makers in Michigan need to make sure that accommodations are being used to help children learn — and not as a crutch to boost test scores. 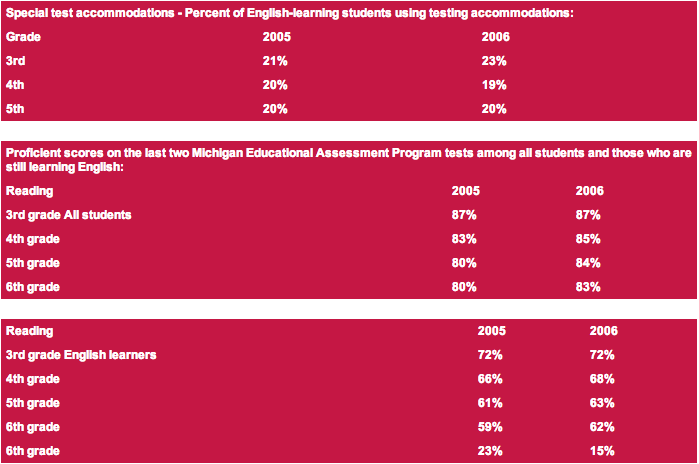