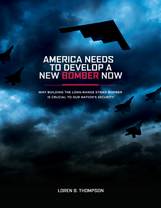 The Lexington Institute has prepared a concise study explaining why development of the Air Force’s Long Range Strike Bomber (LRS-B) is essential to national security. The following summary captures the major points made in the study.