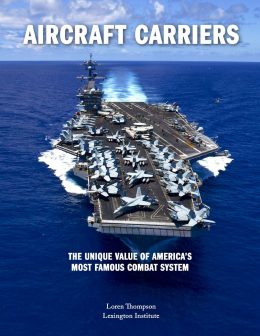 Aircraft carriers are the preeminent expression of U.S. military power. The United States is the only nation that operates a fleet of large-deck, nuclear-powered aircraft carriers. With unlimited range and the capacity to destroy hundreds of surface targets per day, each of the ten carriers in the U.S. fleet is a secure base for protecting and projecting American power. 80% of the world’s population lives less than 100 miles from the sea, putting it within reach of carrier air wings that can execute a diverse array of military options.

Large-deck, nuclear-powered aircraft carriers are a good fit for emerging threats. In the years since the Cold War ended, the world has seen a surge in new threats empowered by information-age technologies. Whether state-based or stateless, emerging adversaries seek to deny U.S. forces access to their regions and undermine America’s overseas allies. Aircraft carriers enable the U.S. to continuously exert military power in contested areas without having to rely on vulnerable land bases, and can be quickly moved wherever they are needed.

Carriers are in continuous demand from regional commanders. Because the 60-75 aircraft in carrier air wings can perform a diverse array of military functions from sustained strike warfare to counter-terror operations to reconnaissance missions, carriers are in continuous demand from regional combatant commanders. However, the number of overseas deployments has risen since the Cold War ended while the number of carriers in the fleet has declined. The Navy needs more than ten carriers to avoid over stressing its ships and sailors.

Aircraft carriers are extremely difficult to defeat. Aircraft carriers are much harder to target than land bases because they are continuously moving. With hundreds of watertight compartments and extensive armoring, it would be difficult to sink a large-deck carrier without using nuclear weapons. Carrier air wings are equipped to prevent hostile aircraft, surface combatants and submarines from getting near (carriers can outrun submarines). Each carrier is defended by both its own missiles and guns and those on escort ships.

Aircraft carriers cost less than 1% of the federal budget. Large-deck, nuclear-powered aircraft carriers are the biggest warships ever built, and they have a price-tag to match. However, the entire defense budget is only 15% of federal spending, and the Navy is a fraction of that. Even if all the costs of building and operating carriers plus their aircraft are included, the cumulative cost is less than 1% of the federal budget. That is still true if escort warships are included, although more destroyers and cruisers would be needed in the absence of carriers.

None of the alternatives to carriers work as well. Carriers are not the only way of projecting U.S. air power abroad, but in many cases they are the most effective option. Land-based tactical aircraft require access to local bases that might not be available, or could be targeted by enemies. Long-range bombers flying from further away would still need support from planes like tankers tethered to local bases. Using standoff missiles rather than carrier-based aviation to attack targets could raise the munitions costs of an air campaign 50 times or more.

The new Ford class of carriers delivers increased capabilities, decreased costs. The next generation of carriers is called the Gerald R. Ford class and includes a range of technologies aimed at making nuclear-powered carriers more lethal, survivable and efficient. The number of daily aircraft sorties that can be sustained under peacetime conditions will rise from 120 to 160, and can reach 270 in wartime. But crew size will shrink from 3,300 to 2,500 and air wing personnel from 2,300 to 1,800. Manpower and maintenance costs will be greatly reduced.

The Navy needs enough carriers to get the job done. Aircraft carriers deliver unsurpassed versatility and flexibility in dealing with overseas threats. However, a force of ten carriers is required to keep three forward deployed, and indications are that more than three will be needed. The current mismatch between supply and demand wears out warships and sailors alike. Increasing the size of the force to eleven by keeping the Ford class on track is essential, and further steps may be needed to assure regional commanders get the support they require.