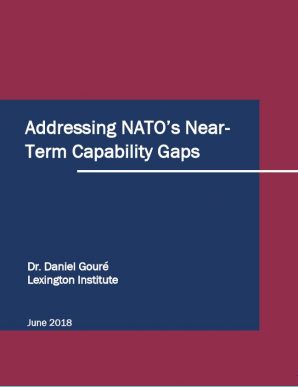 For the first time in more than a generation, NATO must confront the possibility of major conventional conflict with Russia. This has completely overturned NATO’s defense strategy as well as the budget and force structure plans of virtually all member countries.

Although the European members of NATO spend some $300 billion a year on defense, much of that is misspent. After years of dithering, the Alliance is only just beginning to address critical shortfalls in such capabilities as airborne intelligence, surveillance and reconaissance (ISR), aerial refueling, logistics and cybersecurity. In addition, NATO forces are poorly situated to deter Russian aggression in Eastern Europe.

It is clear that NATO must reverse the decades-long decline in its military capabilities. To that end, the U.S. is sending military forces back to Europe and redeploying those that were resident there eastward. Company-size formations from the 173rd Airborne Brigade are being deployed alongside small contingents from NATO members to the Baltic countries and Poland.

However, a single U.S. airborne brigade and one lone Stryker brigade, even when supported by a rotational heavy brigade and a combat aviation brigade, are simply insufficient to deter a determined Russian adversary. To paraphrase a Churchillian formulation from World War Two, these new deployments are not the end or even the beginning of the end. They are, perhaps, the end of the beginning.

NATO has long recognized the need for a rapid response capability. In 2002, it created the NATO Response Force (NRF), a multinational force made up of land, air, maritime and Special Operations Forces components, which was supposed to be rapidly deployable. In reality, it would take months to actually organize and deploy the NRF.

In response to Russia’s rapid invasion of Crimea in 2014, the Alliance supplemented its NRF with the creation of a Very High Readiness Joint Task Force (VJTF). The VJTF consists of a multinational brigade of up to five maneuver battalions, supported by air, maritime and Special Forces. The VJTF is supposed to be fully ready and rapidly deployable on the basis of early warning.

It is increasingly evident that an even more robust NATO response is necessary, given the Russian military’s capability to conduct a high-speed conventional offensive along its western border. At the July 2018 meeting of NATO defense ministers, U.S. Secretary of Defense James Mattis proposed the “30-30-30-30” plan. This plan would require NATO to have 30 land battalions, 30 air fighter squadrons and 30 ships ready to deploy within 30 days of being put on alert. As the defense secretary pointed out, “We have an adversary [Russia] that can move quickly into the Baltics and Poland in a ground attack. We don’t have the luxury of taking months to mobilize.”

Today, NATO needs forces on the ground, particularly in Eastern Europe and the Baltics that can prevent an early, one-shot victory. Russia cannot fight a large-scale or protracted conventional conflict. Nor can it stand nuclear exchange. Therefore, Moscow must be made to realize that it will have no easy, cheap military victories. The risk of escalation must be on Russia’s back.

With these strategic goals in mind, the West needs to be able, first, to absorb and ride out a Russian initial conventional attack and, second, conduct a series of operations to degrade and even defeat Russian forces in the Western Military District.

At a minimum, the U.S. and NATO must take the following steps to address critical near-term capability gaps: